Evile Album 3 is finished! 100%! Just down to @RussRussell to master it now. Metal!!!
The album is highly anticipated in thrash metal circles as Evile are considered to be one of the most popular of the New Wave of Thrash Metal Bands. The as-of-yet titled album will be the follow up to 2009's Infected Nations and will be the band's first album since the tragic death of bassist Mike Alexander that same year. 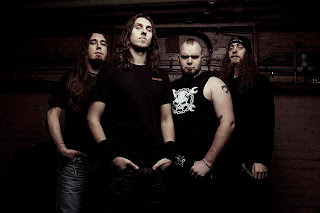